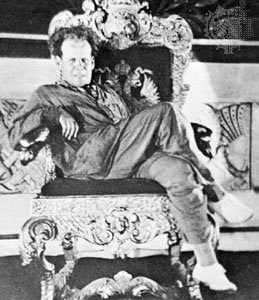 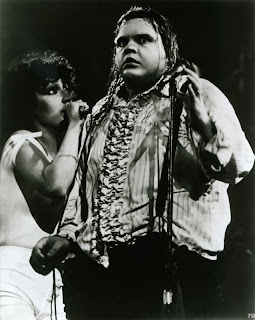 I was listening to Meatloaf's Bat Out of Hell II the other night, as I am wont to do. There's no hint of cynicism or kitsch here - it's simply a remarkable album, fully Baroque and nostalgic and self-aware and overblown.

But what I was struck by was the juncture between Meatloaf and Eisenstein. Eisenstein avec Meatloaf... Seriously. Meatloaf not as the truth of Eisenstein, but - in an utterly disjointed historical and geographical way, a point of contact between two fields of expression - as an extended symptom of the structures we see embodied Eisenstein's image-thought, strained out to the conclusion that lay outside of the possible scope of Eisenstein's work: namely, a full, fraught, and "ecstactic" (a term vital for both Eisenstein and Meatloaf) working-through of the status of objects under capitalism.

First, though, we face the similarity of the mechanisms of affect and tone of their work, particularly in how grandiosity allows one to overleap sentimentality (as in, the empty demand that a cultural consumer feel the emotion/sensation demanded of her or him without adequate motivation to feel it) and actually produce a system of potent audience manipulation.

For Eisenstein, this is the montage of attractions, the calculated system of shocks resulting from dialectical montage techniques.

For Meatloaf, this is the precise inflection of Jim Steinman's compositions, the warbling, the low guttural shakes, the work that is echoed in the lyrics of "Wasted Youth": "But I do remember that it wasn't at all easy / It required the perfect combination of the right power chords / And the precise angle from which to strike."

In both cases, it is virtuosity itself that transforms the hollowness of sentimentality into a sort of inverted hollowness, leaving us vunerable and doubting what kind of people we would be were we to remain stony-faced before this measured frenzy. In other words, you may think that you are "better" than "I Will Do Anything For Love (But I Won't Do That)", but after 8 minutes, you find yourself on your knees, clutching at your chest at the thought of how infinite love meets the finitude of sex with women who are "breathing fire" some nights, some nights "talking nice."

By looking at the rest of "Wasted Youth," we get the more potent connection:

What is going on here? An expression of pathetic materialism, a form of dialectical thought and method that is concerned with the pathos of the object, with the techniques of drawing out the ecstatic core of the object, not as transcendental but as situated and singular.

Through structuring shocks of reversals and recognitions, the "tragic" exposition of the object: its pathos, its suffering, its enjoyment.

Crucially, these are not fundamentally totemic or fetishistic objects. They are objects of industrial production in a world of such objects, those which seem commensurable until they meet in the flare of the "pathos encounter" (that third moment of Aristotelian dialectics, in which the invisible movements of recognition and reversal become seen in the suffering instance):

The specificity of the objects named here are key: the varsity cheerlead, the 1981 Harley Davidson motorcyle (which, unlike the car, is invested with fetishistic force as the incarnation of the rebellious spirit in Meatloaf's universe, as opposed to the car, which is simply the site for coupling). But they remain, resolutely, mass-produced objects. Herein lies the dialectical turn proper to the pathetic materialism particular to Eisenstein and Meatloaf.

Recognition: These objects have fetishistic value that allows them to participate as the crucial kernel and spark in a structure of meaning-making and symbolic validation.
(The promise of the milk separator as the concretization of the collective, the promise of the guitar as the point of leverage back against a world of conformity.)

Reversal: These objects are mass-produced, the results of an industrial giant (capitalist or Soviet): how can they have this value when they are just one of many. The creation of this value must be our construction, based on the relative scarcity and/or cost of the object. This fact can either be the powerful realization of communal enterprise (it is us, the commune, who are the motor here, this machine is just a machine that allows us to perceive our force as a we) or the alienating recognition of reification (if my subject-hood is orientated around owning a certain constellation of objects, what happens when I recognize that these objects are all widely available for sale: am I merely a constellation of money.)

Pathos (or the suffering/enjoyment/jouissance of "stupid first appearance"): It is precisely because they are mass-produced objects that they do not expose their ecstatic core. Hence the hard work - and the promise of virtuosity, collectively or as an individual - of those whose techniques, whose "precise combination of the right power cords" brings forth the blood of reified, mute matter. And the splattering cream of the separator, the ecstatic spray. 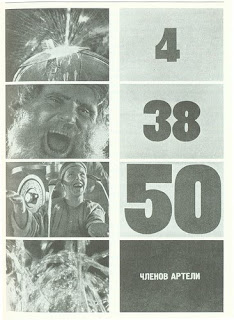 The point here - and the point where Meatloaf transposes, symptomatically, the thought of Eisenstein - is that this vital moment is the moment where we see the reified object truly taking on the "arbitrary" value with which it is invested. This is the condition that capital both hides and articulates. Towards the end of "Wasted Youth":


And I ran up the stairs to my parents' bedroom
Mommy and Daddy was sleeping in the moonlight
Slowly I opened the door, creeping in the shadows
Right up to the foot of their bed
I raised the guitar high above my head
And just as I was about to bring the guitar
Crashing down upon the center of the bed,
My father woke up, screaming
"Stop!" "Wait a minute! Stop it boy!
What do ya think you're doin'?
That's no way to treat an expensive musical instrument!"

The father's cry here is analogous to "when we hang the capitalists, they will sell us the rope we will use." At the moment of his death, he can see the guitar as only a crystallization of exchange-value, and his murder as wrong because of the damage done to the murder weapon. As the Meatloaf narrator tells his father:

"God Dammit Daddy! You know I love you, But you got a hell of a lot to learn about Rock 'n Roll"

Or a lot to learn about capitalism. About the point that it is not us, the knowing-better-but-still-doing-it bourgeoisie or the too-oppressed-to-notice working class, who foolishly invests fetishistic, totemic value in the objects of our lifeworld. It is the very structure of production that does this. And what Eisenstein points to, standing in a world that hypothetically undid the status of objects (only to eventually return the mute fact of scarcity with a vengeance), and what Meatloaf sings is the willful return of the repressed of mass objects, the buried core of meaning brought to bear on us through the precision and grandiosity of their ecstatic art.

As Meatloaf puts it, stitching together an emotional epic into the inscription on a Detroit mass automobile:

Objects in the rear view mirror may appear closer than they are. 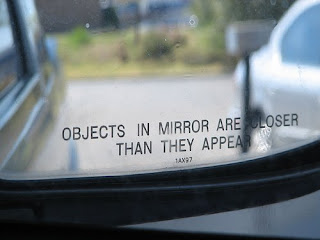 This is, of course, a reversal of the standard inscription: objects in the mirror are closer than they may appear. But it is the mirror itself, the optic that hides its pathetic core, that is always close, pressing, and waiting for the right collision.