If you want to get arrested for your cause, you should rob a liquor store (And why no one should ever listen to Naomi Wolf about "protests")

Two brief notes on the alleged occupations of streets, Wall and otherwise.

Things are starting to get the tiniest bit messy.  Good.

Big cheers to those who know that's what it means and takes.  And to the messy spread of it to other places, to other "issues" (read: capital, state, and - for old time's sake - church; jail, immigration, unpaid labor, policing, foreclosure, access to medicine)  that have nothing to do with "Wall Street greed," as none of this has much to do with that in the first place.

Scorn and loathing to those wee katechons who restrain, who make nice, who tell you to sit down.  Whose breath reeks of the word peace as if they've long been drinking from the toilet. 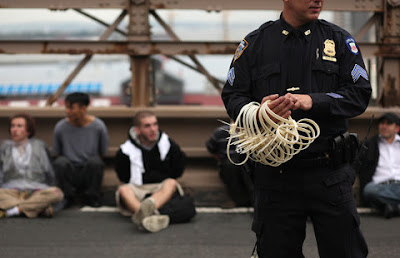 But a brief comment, one that applies not to those who got picked up on that bridge but to a whole lot of what has been said about this?

No one should not let oneself "get" arrested.  There is nothing sexy, useful, or sacrificial about doing so.  It is a waste of legal fees, time, and zip ties, and it renders protest recognizable in an old-fashioned, familiar, and therefore irrelevant way.  (And not "old-fashioned" in the Barcelona 1936 way, for example, which would be quite another story.)

If one thinks that 700 people getting arrested makes a splash, try seeing what happens when 700 people don't get arrested, despite police efforts to the contrary.  See what happens when a video is released of forty people un-arresting someone successfully.  See how that will change the stakes in the way that a mass arrest never can.

But if you want to get arrested for your cause, you should rob a liquor store and use the cash to buy needed materials for those protesting.  That is literally more useful.  And hell, you may even get away with it.

Do not sit there and wait for it.  Do not listen to others who tell you to do so.  If you see someone people to do so, shout that person down.

"please protesters, I can't say this enough: DO NOT MARCH. SIT DOWN or stand with linked arms. DO NOT MARCH. I have studied protests for the last fifty years -- the ones that ended in state violence (they always win) are short and the MARCH. the ones that brought down regimes are LONG and STOP TRAFFIC and involve SITTING DOWN OR STANDING STILL WITH LINKED ARMS. They take patience. "

Well... In response to her, adopting her preferred typographical choices for ease of comprehension:

DO NOT LISTEN TO LIBERALS as their historical moment has passed and CONDEMNED THEM TO IRRELEVANCE.  Stop traffic, yes, but there are many things that stop traffic other than your own BODY.  They are highly worth considering.  Many of them may be found in or directly alongside those roads on which the traffic moves.  It's what we who have "studied protests" typically call BARRICADES.

We know the Gandhi-ish examples she likely has in mind.  Those bear no connection to the state of affairs in the US today.  One shouldn't confuse recent instances of "protests without high death counts" and "peaceful protests": they are not the same thing.  A single example refresher on said point ("Unlike previous protests, there was no large scale police crackdown. The parliament was partially burned during the protests.").

And if she thinks that what happened in Egypt, or the Arab Spring more broadly, was "peaceful" or related to "SITTING DOWN OR STANDING STILL", she has simply no sense of what went down, the risks people took, and the steps they took (i.e. sharing information, choosing not to just "stand still" or "sit down" and take it, not going back to work) that made those risks worth taking.

And in case our historical memory is as SHIT as Wolf's, let's recall that the "protests" that "brought down regimes" recently, or come anywhere near doing so, are ones that a) threaten to, or do, bring their economies to a halt, b) cease to draw a clear line between the political, the social, and the economic, c) defend themselves, d) do not sit down and wait for the very state violence you mention,  e) recognize that insofar it is serious, it will end in state violence one way or the other, and f) leave behind that entire terrain of "march", "sit down", and "protest" and begin doing things closer to what the words "occupy", "assemble," "riot," "get very seriously organized," "barricade," and "halt" actually mean. 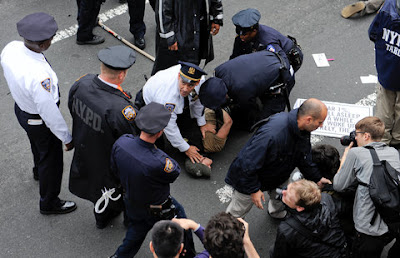 And above all, do not sit and watch others get arrested while waiting your turn.  Do not let the taking photos (even if they look like they'll be very good) of that act take the place of stopping that arrest, even if it means that the subject of the photo - someone being pinned and hurt by a number of men - will cease to exist.  In this case, it is the absence of a picture will be worth a thousand words.   For when people speak of "a critique of separation," of the problem of a fundamental divide between seeing and doing, this is the sort of thing they have in mind.

And for once, they're totally right.

And on 11th anniversary of "A single example refresher on said point": a lot of water will have to pass under that same Bridge where the protestors were arrested until a similar event occurs there; "A single example refresher on said point" was fruit of a decade long labour, with a lot of conditions in its favour: U.N. sanctions, immense inflation, poverty, 2-3 bloody wars, nato bombing; all the while, protests were becoming more and more massive, until finally, workers joined in. and then, even that was not enough, political and economic support from outside was necessary to be able to do what was done.
And who is protesting in Wall Street? If I understand correctly, people who do not have jobs are protesting (I do not mean to disrespect them). Much more people need to be pissed off, no, much more people need to show that they are pissed off, but probably they are afraid, because the banks will take their firstborns to pay off their debts.
Of course, “It has to start somewhere It has to start sometime”.

Entirely agreed about the long, bloody, and - in retroactive accounts from afar - often forgotten lead up, all that brings something to a point at which it becomes possible for some to mistake it for something "peaceful."

But about what is happening here, although I still think it important to critique and inflect at least some of the terms of it (for example, this nonsense about "pace-keepers" and the claims of "internal provocateurs") as well as to be clear-headed about), the fact remains that it should be taken as itself part of some long, messy lead-up, not as a "thing in itself". People will figure out what works and what does not, over a long period of time, and they will get tired of being told about how they should or should not act and how they need to stay calm, peaceful, and legal. And that is a very material, hands-on determination that occurs - thankfully - independent from what I or any others will say about it. Above all, what matters isn't necessarily what happens on Wall Street. It has to do with how it is getting picked up and replicated elsewhere, with the inevitable fact that it won't repeat identically. People who know the situations where they live will do it how it should be done for those places. And we can be sure that in a lot of those places, there will be far less keeping the peace.

nor is there any hope for protesters who believe their work is in protesting "bankers" or "wall street" as opposed to a system, which runs contrary to quotes the supposed "leaders" have given to the press: "we're not against capitalism, we're for capitalism, we just want it to be functioning properly"--something it's been doing masterfully for quite some time.