Listening to J. Stalin in the negative city 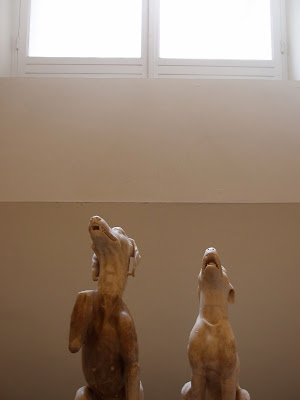 I have seen a few things in my life, and I have taken photos - inconstantly - of a few of those things.  Few have heretofore made me as happy as this.

I'm starting a series of "dispatches" from Naples.  They will not be Roman Letters 2: The Lachrymose South, in large part because they are not to a series of ones, single letters, singular friends and comrades. But insofar as my life is a void of structure, these will perhaps produce a fleeting illusion of continuity across it, if only - likely only - for me.

They are titled Listening to J. Stalin in the negative city.  Henceforth LTJSITNC.

J. Stalin is a rapper from West Oakland.  (So named because, "he was short like me, but he was always smashin' on everybody.") "The negative city" is one of terms used to describe the immense Neapolitan sottosuolo, the underground.  Not the underground as in "the metro," but the sprawling web of Greek and Roman ruins, cisterns, tunnels, roads, evacuated markets, empty grain containers, walls, and junk heaps that lie beneath - and mirror - the world built above it.  A good 60% of this lived, teeming, leaning city stands on top of this other one.

The other day, when I was down in this other one, breathing air that is neither older nor newer, neither stale nor fresh, looking at Nike Air footprints in beige dirt, I was listening to J. Stalin.  It made some degree of sense.