The last house on the Hungarian modernist left (part 1) 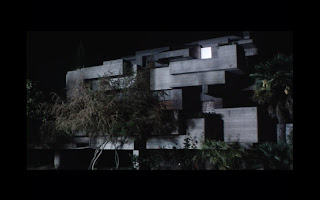 This is the house from Argento's underwatched Tenebre (1982), a house revealed in a stunning crane tracking shot that moves over the exterior of house, creeping slowly, turning, disorienting the viewer and letting our vision rest on the textures and forms of the concrete exterior. I've written a few times on this before, so I'll just crib my earlier comments from a piece I wrote on this ("Killer design", if anyone wants to read that whole thing, let me know) to get to what I want to say now. Here's how I set it up then:

This, the house whose juts and ledges the camera traverses, occupies a doubled position. It is, first, a cipher for modernism as such, an archetypal high modernist construction. In particular, it manifests the contradiction proper to the architectures of modernism: a rejection of “style,” an attack on ornament, a turn to the negative in exposing the form of building itself, yet this very attempt produces a form of minimal difference just as stylized as those rejected. Argento’s camera elaborates this, tracing along the striations of the concrete, making aesthetic and “ornamental” the material that signifies building’s supposed reduction to essentials.

It is, in this sense, the duration of the tracking shot that produces the second position of the building, that of a singular, incommensurable material artifact, a built event resolute in its particularity. Even if it was a mass-produced design, the winding, probing gaze of the camera shows the minor deviations, the subtle patterns of the concrete, echoing, in a sense, Van de Rohe’s German pavilion in Barcelona, that monolithic space whose ornamentation lies in the “accidents” of its material.

Building as ideological form, building as exceptional event. Argento reveals a built world at once utterly commensurable – the building as instrumental device in the articulation of minds and money – and incommensurable, as material consequence and remainder of such planning. The question here is not how spaces come to function as such sites of tension but of how they relate to this sequence’s gory conclusion, to the possibility that such a chain of events is not mere contingency but rather a structurally conditioned outcome. In other words, we face the possibility not just of spaces of violence but of the violence of spaces.

Rereading this, I think it still stands, more for giving a glimpse not of Tenebre as a horror film but of the world it depicts and torques. Argento described the film as his Blade Runner, albeit a minor and less spectacular one, set an indeterminate few years in the future. However, we should insist, what's particular about Tenebre's world is not that it is an architecture and built world of the future but of a future of the past, the modernist constructions drained of their utopian impulse in which we still live, which were not for us and do not belong to us. In other words: what does it mean to occupy a built world designed through and for prior ideological conditions, for a “partial utopia of the plan” (Tafuri's phrase) corresponding to a mode of capitalist accumulation no longer relevant to the bodies that traverse these spaces? The historical conjuncture of Tenebre is a "post-Fordist" world (one always in its promise of being-future, of money that doesn't have to be cashed out in the present but simply recirculated), yet it's space is that of the bastard dreams of Fordist accumulation, the Melnikovian Soviet projects detourned from their social reconstruction fantasies, the integrated design of Bauhaus. And ultimately, as manifested properly in the poured concrete house of Tenebre, Brutalist architecture, that lineage from Le Corbusier through the New Brutalism of the Smithsons.

I don't intend this as a critique of Brutalism: I actually agree with much of the New Brutalism program (if we can call it that). Rather, my point would be that the material staying power of architecture - its visions of permanence and eternity, of going from a monument of what the social world could be to the founding building block for that new world, reconstellated and rebuilt around - makes the buildings unhomely for any and all occupants. This isn't to say that they are unpleasant buildings to look at or be in, that old and fangless bourgeois critique. Rather, they are uncanny (in that they are the eternal return of a utopian blueprint), and no one is ever at home in them (in that they are designed for a subject-to-come who fundamentally cannot and will not, given that this vision of subject-to-be is based on a historically particular mode of capitalist accumulation that shifted, leaving the building behind and new bodies to occupy its rooms).

The brilliance of Tenebre (not Argento, that's another issue) is that it registers - symptomatically - this condition and renders it manifest. There is literally no one at home in this film, especially when one is being chased by a killer. And so in this mordant humor, we detect the crucial other side to these buildings, not just their position of the static unwanted guest (or rather, unwanted host - a point I'll return to regarding The Black Cat) but of the past violence they sublimate and the future violence that they allow to seep, splatter, and stain the present. 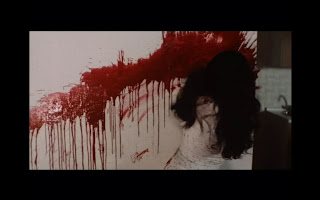