"I became ruler through treaties; By my treaties I am now enslaved." 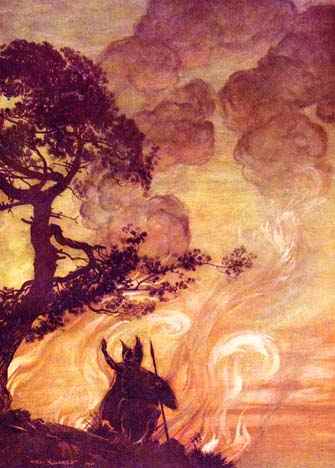 But if the 'German Socialists' were never socialists except in name, their allegorical transformation into the Wotan of the Ring signifies their reconciliation with the bourgeoisie: they have themselves become fathers, their anger rationalized as paternal punishment, just as their conciliatoriness is that of the father who wishes his oppressed child a good night and the world a good nothing. Their insurrection has vanished like a ghost, leaving nothing behind but its outward appearance. Wotan is the phantasmagoria of the buried revolution. He and his like roam around like spirits haunting the places where their deeds went awry, and their costume compulsively and guilty reminds us of that missed opportunity of bourgeois society for whose benefit they, as the curse of an abortive future, re-enact the dim and distant past.

[Adorno, In Search of Wagner]

Yeah: thought I recognised that: Goetterdaemmerung, yeah? (Don't know it in English, only in German! Great pic, again - any source for it besides heathen website? Must be 19th/20th oil painting.)

I knew it was Wotan, even before I scrolled down on my tiny screen: sounded like him. Still: he's not all bad, you know (though he does tend to lurk around like a ghost!) In Richard Wagner's conception he is a *noble* tragic figure, to rival any in Greek Tragedy - pray tell me in what way the guy you're comparing him to, Hitler, was in any way noble?!

I believe it was actually C G Jung who started this "Hitler (or rather the German national spirit) as Wodan thing. See, Odin/Wuodan/Wotan is in one aspect, the Germanic god of rage, of passion & Dionysiac excess! (Wuodan ->(modern German) Wut = fury. See? But in his calmer moods he's god of knowledge and words. (Like Hermes and Thoth: these latter are his real cognates. Sigh. Don't you materialists know anything?) When you've got him in fury mode you have Allfather on

..a bad day! But to see him as just one thing would be simplistic.

Yeah. That was Theodor Adorno you were quoting? (Some of your posts could be longer.) Actually I think - why stick with comparisons between the 1930s German bourgeoisie and Wotan?? Why not go for the "strict father" god most people know best - God the Father in the Bible? He's sure to have had more influence on modern Germans than the guy with the feathery helmet!

(All Father gods are depressingly similar, though. Really very wont to sacrifice their own sons.. then look for more scapegoats, to punish for that.. Loki knows.)