On Sorokin's The Queue and what's to be gleaned, for resistance and refusal now, from an experimental novel about being stuck in line, interminably, waiting for an unsure object - is it American? is it shoes? - and all that happens while waiting for that unsure thing to come:

The novel is caught somewhere between 1) a husky, black-bile laugh at the bureaucratic nightmares of USSR's final years, and 2) in Sorokin's afterword, a nostalgia for the thought of rational organization that still persisted, in whatever perverse, flickering, shadowy forms. As such, it appears initially stuck between the thought of two failures: the failure that was the organization of daily life (the queues, the shortages, the inability to correlate "need" and "desire"), and the failure of the Communist project to stick to its guns. (The failure of Communism to be Communist.) The nostalgia isn't just retrospective, not from the hindsight of Putin years. Rather, it's there, in the queue itself, in the still-active years of the Soviet Century: the absent homeland on which you still live and never really left, even as it left behind what would have been, the absent distance that would let you declare fully, this isn't how it was supposed to be... 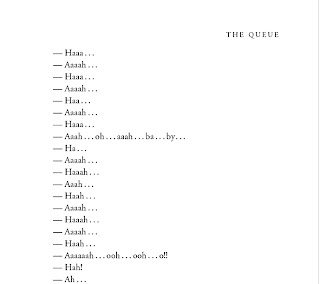 But to say that the novel is pulled in these two directions doesn't indicate either the affects it describes or the affects produced by reading it. More simply, it may exist between these two failures, but what exist is something quite different. Against these double-bleed outs of emiserated, stuck present and entropic, lost present that should have been, the novel is ruddy, full-blooded, goofy, vertiginous. There's a lot of fucking, swearing, joking, drinking, and fighting with sausages, even if the latter is relayed from the experience of another queue. There are pages (see image above) primarily filled with, Aaaaah... Haaaahh..., a guttural see-saw sex scene. If the queue is a site of deferred satisfaction, the object that will never come, plenty of satisfaction comes during the act of waiting. And given that the book ends with the sated couple in bed, having learned that the fools are temporarily "queueing for nothing," the point of the queue simply becomes the queue itself. The absent object is the occasion for what would not happen unless we thought we'd get something out of all this. 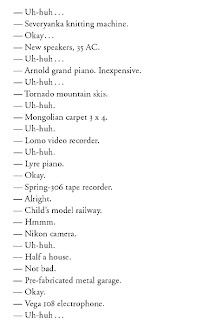 Furthermore, as a book basically about how we bide our time when the rationalization of time spent breaks down, it creates a further gap, perhaps beyond "success" or "failure," between what this time is supposed to be like and how it is experienced. M. made the necessary point that while it is "about" unending waiting and slowness, it reads very quickly: there's a total breakdown of the prospect of mimetic sympathy here. She's spot on, for we may get bored with the book, but it's a different boredom than that of the queue itself: it's the flitting boredom of the distracted reader, who sees pages and pages of what looks to lack difference, and idly skips ahead. (Pages and pages of roll-call Russian names being called out, followed by the affirmative "Yes!", or this slightly more dizzying array of potential objects, but which we nevertheless see as litany.) Our boredom is not durational, for we can fast-forward, slip ahead. Nowhere more so than the blank pages inserted to cover the time of the night, when speech doesn't happen. How are we to read them? There may exist readers fastidious enough to let their eyes rest on them for an appropriate amount of time (like those museum goers who stare into a Robert Ryman white canvas for what they imagine to be enough time to "get it," or at least to fake it for others in the gallery). But I'm not among them.

We might ask more broadly about the difficulty of writing in reproducing boredom or the feeling of the interminable mimetically. Obviously, the vast majority of writing bores us. But thinking here of writers such as William Gaddis, who's closest to Sorokin in terms of the "unattributed speech" style, it's hard to fathom how to make us read slowly, to replicate the particular boredom of a situation without providing a form that allows us to short-circuit the whole thing, to skip ahead, to jump the line.

Maybe that's the point, this coming undone. Genuinely absent from The Queue is the rationalization of time. If one of the promises of state socialism was an organization of time beyond the systemic irrationality of the market, of exertion that only happens for a discernible, logical purpose (i.e. necessary goods, food, culture, etc), in the novel's waiting, we see time divorced from instrumentality in the service of unburdened - and unachievable - consumption. Even if the queue doesn't ultimately get what it came there to get, it never knew what it came there to get, and it doesn't have to labor to get it. Or so it seems, for what is the time invested in the queue if not the labor of shopping, of consumption itself becoming the structural principle of time spent. The nightmare of the Soviet - the breakdown of supply and demand, and with it, the breakdown of the collectivity over individual desires - is here the dream of contemporary first-world capitalism: labor is being done somewhere else, by someone else, and the sheer fact of our consumption time (and consumption of time, just continuing to bide our time) is enough to jolt ahead the circulation and auto-generation of capital.

Of course, in fiction as in economics, this doesn't work out so well. And what remains from this is this coming-unstuck from time as value. Our waiting is genuinely valueless: we have time to kill. And kill it we must, because hovering behind the chaotic carnival of the queue is the lingering connection between boredom and horror. Of facing non-productive consumption, unconsummated, formless, unable to give shape or order. How can one not yearn to skip the line?

Next week, in these days of strikes across universities and across the nation, there will be endless queues: there will be lines of people, some more orderly than others. Waiting. Perhaps generally with the expectation that the time put into the act of waiting - that is to say, of not working - and crowding the roads will result in the missing object to come. What is the imagined, missing object for which we invest our time, for which we declare an exception to the normal phases of work and rest? It's too easy to say that "it's different for everyone," that a politics of "coalition" or the like would imply: same means, different envisioned ends. More generally, we seem to wait for something that won't just signal an end to this particular time of waiting but that would seemingly reinforce both its necessity and negate the need for it to continue: a governmental promise, a monetary commitment, a phase shift that indicates a different direction in public education and a fairer treatment of workers.

But we know that such an object will not come, insofar as our waiting remains a waiting for. The queue won't end if we get that absent object. This is not to dismiss the genuine concerns that lie behind the strike: the continued harassment, humiliation, and degradation of low-paid workers, the structurally determined privatization of public education, the simultaneous shrinking access to and quality of that education. Rather, it's because those concerns do matter - because they are lived, and they are things that need to be remedied, particularly when the desperate concerns of those treated worst and with the least possibility of striking back individually against such treatment - that we should insist that nothing can be given that will remedy them. However, neither is this to claim that the solution is a false immediatism, or a simpler fantasy that anything we could take would suddenly fill that gap.

Against this waiting for, a thought from The Queue. At one point in the novel, the entire line shifts its location to be able to get a drink. And in this, we see what we feel elsewhere, that the queue itself constructs another possibility held out and deferred: of fully grasping a passage from the accidental collective which happens to come together because of waiting for something to happen

to the the fact that such a waiting together is the very thing that is supposed to happen.

That there is no thing to be given or received in reward for such waiting. That the real move forward - not skipping ahead in the line, but the line as a whole skipping ahead - is in the queue turning back upon itself, looking at what has emerged in the contingency of all asking for the same thing and being told not yet, not yet... And like the line moving as a whole to get what it wants, it isn't far to start imagining the mobile, roaming queue, that waits for nothing, that isn't a fixed structure, that isn't exceptional or temporary. The strike not for the necessary and impossible object, but for the grounded collective that emerges only in such an occasion as its long overdue eclipse.

Evan, the issue of temporality might profitably be compared with something like the train scene in Kuhle Wampe where Brecht attempts to represent the emergence of collective thinking through the forced duration of proximity that breeds unspoken affective channels. There, Brecht is able to evoke and enforce non-activity through the ticking away of the film frame in the way that leads Baudrillard to speak of the 'democracy' of cinema (ie, no one gets to the end faster than another). With or without the Brechtian comparison, cinema is the inevitable target for Sorokin's negative time, and this comparison brings us to an unexpected bridge from hyper-realism to hyperreal. If the narrative forms of cinema sought to approximate those of literature, here Sorokin has inverted the appropriation to destroy any source context for narrative or indeed time (at which point the inevitable Deleuzean/Bergsonian citation is appropriate rather than begging the question of what Sorokin is doing). We can imagine a film in which we are forced to sit for whatever duration Sorokin imagines equals five pages; but we can't sit for an indeterminate amount of time (without, as you say, destroying instrumental temporality itself).