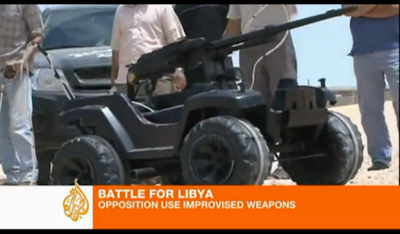 Libya rebels use discards to make own weapons - Africa - Al Jazeera English
Salvage goes back to its - early 20th century, this time not Brits stripping grayback for gas masks but rebels lifting bike handlebars and office chairs, taking things that mount on planes and are dropped from planes, enemy and "ally" (albeit without the willingness to actually lessen a death count by truly intervening or not, just hobbling the enemy enough so that the entire thing can bleed on and drive the country into further ruin) onto villages and, in those villages, putting them onto jeeps and shoulders - roots.
In utter seriousness, this makes my heart beat faster. Curiosity may be the mother of invention, but desperation is of repurposing.