We insist on your self-determination 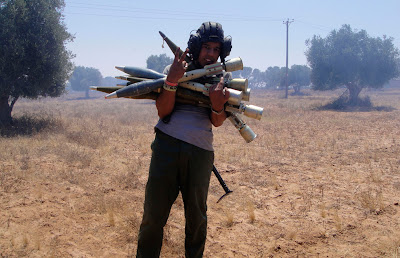 It is utterly true, then and now, that the mode of the NATO intervention was abhorrent.  Or more accurately, the non-intervention, as it intervened only to the point of "letting" things hobble forward, a dragging out without commitment.  Bomb enough to maintain a status quo of civil war, but never enough to be consequently blamed for actually deposing/exploding a head of state.  The point was to be able to claim, as they surely will now, that they acted in the name of freedom but not against sovereignty.  To claim that it was the will of the people (for it is not NATO's business to question the legitimacy of states, at least until conveniently questioned by those people) and that such a will depended on the aid from afar (for it is not NATO's business to question the capacity of people to win a civil war, at least until that war goes against what seems "worth" aiding).

Or Cameron: “Our task now is to do all we can to support the will of the Libyan people, which is for an effective transition to a free, democratic and inclusive Libya. This will be and must be and should be Libyan-led and a Libyan-owned process with broad international support coordinated by the United Nations.”  It will, must, and should be a Libyan-led process, with the UN coordination that demands that it be Libyan-led in the way the UN wants and in such a mode of free self-determination (read: not particularly Muslim, open to trade and opening up markets) that will accord with the "broad international support."  Support, which, it should be obvious, pre-dats that self-determination in that it only becomes support when and if the process lines up with the template.  And if not, a bit of hand-wringing and justification that next time around, you just can't leave it up to those people...]

That was and will be the double claim.

That aside, it's not every day you see rebels take a capital.  And that's still something that exceeds that will, must, or should.

When you put it that way, it is exactly the same as that show “what not to wear”- 2 hosts offer you a lot of money to throw away your clothes and tell you what new robes to buy. Finally, all candidates end up with new clothes, hair and make-up, looking exactly the same as the one from the previous show and the one from the next show. 2 hosts are always very very happy with achieved result, very sympathetic and extremely ecstatic in the end.