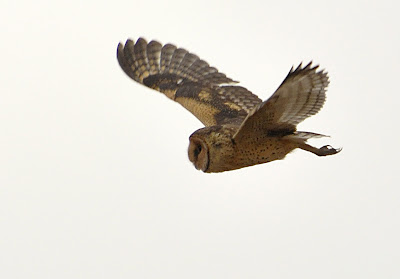 The gap between catastrophism and realism - already as minute and over-loaded as a tectonic crack - presses closer still.  The further sense that aside from the flaws of any outmoded notion of universal civilizational progress, with the Occident leading the shining way, such a story has, if anything, reversed: it is in those areas of the world called backward that one actually reads the opaque signs of the future.  If there is an owl of Minerva, it is Tyto capensis, and it has long been flying south, circling low over an expanding world of drought.

'Even the northeastern United States - a region normally omitted from any serious talk about domestic drought - is at risk, said Dorothy Peteet, a senior research scientist with NASA's Goddard Institute for Space Studies.

A series of sediment cores drilled from New York marshes confirm that mega droughts can grip the region: One spanned from 850 to 1350 A.D., Peteet said. And shorter, more intense droughts have driven sea water far up the Hudson River, past towns such as Poughkeepsie that depend on the river for drinking supplies.

"We're just beginning to map the extent, but we know it was pervasive," she said. "There are hints of drought all the way up to Maine."'

when you hover over the top link, it reads "planet likely to become increasingly hostile ..." coupled with the owl picture i thought for a second that hitchcock was right: the birds have begun their attack in earnest (which those incidents of bird trying to take down airplanes as a precursor to the hostilities to follow).