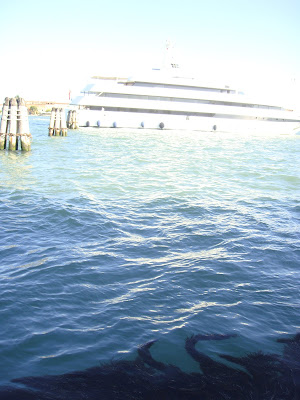 They started by sinking all craft capable of leaving the island.
Elite forces in scuba gear swam the night water, around the island and through its canals, with welders and auto-muffling explosives, and boat after boat went down, gurgling and burping delicately. The few tourists awake and sober enough to catch sight of the slippery shapes moving between the wrecked hulls were promptly dispatched. However, the gondolas were left untouched, a mark perhaps of a gesture of decency that those stuck there be able to circulate their pen with relative ease, perhaps of a certain perversion that relished the thought of them fumbling themselves through the city, capsizing and cursing, without skilled pilots in costumes. The vaporettos, the large water buses that moved around and between the islands, were sunk off the south coast of Giudecca. While excessive, this was a necessary measure: no chance could be left that an Italian, out of greed or compassion, would attempt a rescue of the prisoners.
Migrant workers were massacred without notice, their makeshift rafts torched. More than one visitor, unable to sleep in the stifled air and looking out their flung-wide hotel windows, mistook the guttering flames as sign of a local holiday.
Although the truly rich had tended to forgo Venice in its drift toward total tourist saturation, the fact that the penalization of the city occurred on the last night of the Biennale meant that the gaucher varieties of the noveau riche were still there to buy contemporary art by the yard, pound, and hour, and their personal cruise ships, named things like SLAVIC DAWN and SHAHNAZ, were still anchored off San Marco. They were boarded, inhabitants taken down with silenced shotguns, and laden with incendiary devices on timers: they blew sky high around dawn, in a carefully paced percussion echoing over the city, like the tolling of bells. The rain of Gucci-logoed upholstery, body parts, and hissing champagne was the first opaque announcement to the population of what had transpired in the night.
While the boats were being scuttled, workers went down in the defunct sewers and welded new grates, installed laser sensors linked to cyanide gas jets. Floating smart mines were placed in the surrounding waters, and thermal-sensing turret guns were mounted at strategic points on the surrounding islands. San Michele, the already fortified cemetery island, became a barracks and armory, with a fleet of black Jet-Skis at the ready to hunt down any who managed, against many odds, to navigate the waters without detection. They launched predator drones, which started to circle gracefully on updrafts, as polished vultures.
Of course, many of the relatively poorer tourists had been staying on those surrounding islands. Following a long debate about two possible options (drugging them in their sleep and dumping them on the main island or strongly encouraging them that their vacations were over and that they should be glad that they couldn't afford the pricier hotels along the Grand Canal), a third, simpler option was chosen. They simply shot them in the night. A similar debate was held regarding the few Italians unlucky enough to still live and work in Venice. The hard decision was made to leave them were they were, a difficult but unfortunately necessary cost of the operation.
And so, in the course of less than 6 hours, Venice was transformed from the most popular destination city in Europe to a guardless Alcatraz. Just a generalized life sentence passed on 83,721 tourists, on those still asleep, crammed into luxury economy suites, those planning the sights to be seen the next day, those trying to get laid, those looking over photos taken an hour before, those tossing fitfully, those dreaming of strange glaciers of frozen squid ink and shameful, back-canal encounters with no less than five gondoliers at once.

I.E.: a shot across the bow of humanity, Escape From Venice

That makes two of us.

Ah, yes, of course. I forgot it is fundamentally imperialist to use the names of boats seen in a city as part of speculative fiction. I'll make sure to correct that.

O no, I think I made you think I am the owner of “a boat seen in a city”. Sorry for that, it was completely unintentional; I do not own that boat, or any other boat. In those 5 words that I wrote I wanted to say a) I am Slavic, a Slav, b) even though Venice has a lot of tourists, large number of them are Americans, and I got the impression that that is the preferable type of tourists for Italian tourist-dependent businesses, and c) I see your current train of thought. It seems that I didn’t combine those 5 words well enough to produce intended meaning.