Other than all that (Notes on Transformers 3)

2.  It is oddly beautiful at moments.  A massive honeycomb grid planet, a Bucky Ball writ cosmic scale, almost touching the earth before collapsing in on itself with a soft implosion of rust and creeping fire.  But the rest of the time, it feigns beauty by simply making the eyes hurt.  But not the cognitive faculties: it leaves them dull and barely frayed.  For to wound those would be sublime, which this is not.

3.  There is no point in an ideology critique in the face of such a film, because it doesn't have an ideology.  It has a howling wind, dreamt up in the belly of a CGI rendering program, that lifts and carries things, that makes other things pass in front of our behind them.

Among those things are the bad robots.  They are coded as either Arabic (wearing scarves, despite the fact that no other robots wear clothing, camped in the same desert environment where we see the good robots kill bad - or at least wearing aviators, sweating, and with a severe expression - brown people), black (literally black paint, long flowing robot dreadlocks), cops (now we're getting somewhere!), murderous birds, giant Dune-like burrowing worm-snakes that burrow through and python-strangle skyscrapers, and trolls. 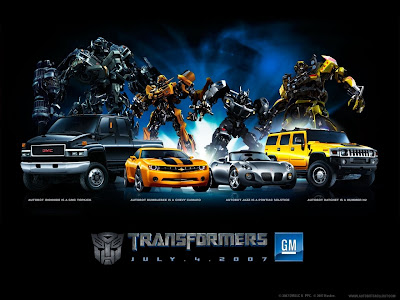 The good robots are coded as, alternately, assholes or the vehicles driven by assholes.


4.  Total, utter absence of desire, on all parts.  There is a young woman of sorts, who is supposed to be incredibly hot, or so the film goes to great lengths to point out, from an opening gambit of an ass-level tracking shot up the stairs, from nearly every character, to a degree that starts to erode its own belief in this fact.  But she is a pure cipher: can we all agree that this set of parts constitutes an approximation of an ideal of the kind of woman audience members want to stare at in 3-D?  No, not her in her particularity, but as an aggregation, as a technology, as likely at any moment as any car or truck to suddenly dissemble before our eyes, and reform into something that also does not especially resemble a human but can be expected to pass for one provided that the camera move away too quickly or linger too long, such that there is a false consonance between our gaping and hers.  OK, then, all on the same page?


[The absence of desire is aided and abetted by the absence of any real absence, other than things like modulated dialogue.  Not a thing lacks.  And where it might, fluttering papers, glints from a missing sun.]

5.  Many "people" "die."  But not particularly.  Rather, they run around a set on which some real fake rubble is strewn and, at some point, they are told to throw their arms out or fall down, at which point are erased from the film by a computer, and replaced by a quick, acceptable-for-PG-13 spray of something vaguely blood color, with a sudden visibility of a very polished skull and a femur or two.  They are, that is, vaporized.  Or the "camera" cuts away, such that they are probably crushed under big feet or lacerated by the spinning razors of a metal snake's tail. But there is no gore.  They are not torn to shreds.  They are whole, and small, boring and mediocre, and then they simply are not there.  Even the man thrown through a window to fake a suicide: we do not see the impact, we do not see him open onto the ground.

6.  Conversely, it is one of the goriest films of late, provided we properly anthropomorphize the robots as we are supposed to.  (Or see them as lesser categories of humans, as in the racialized, exoticized, and demonized bad ones.)  There is no anthrorpos violence, but there is a staggering display of violence enacted on the forms - for they have no matter or weight, just shifting colors and textures - of that which is formed [morph] as if anthropos.  They dig their hand-shaped extensions deep into something we are meant to think as a chest cavity, they leak red paint and oil and anti-freeze, large chunks of rust and chunky geared organs splatter the broken city, they wrap chains around their heads and pull hard, until they come free, sputtering cables leaving it unsevered.  And like the bodies of Dante's thieves, they are never all the way one thing or another: falling through the air, they are folding in and out, like seraphim with many wings and unexplainable differences in national accents.

7.  That violence is utterly without any pathos or sentiment.  This is due less to the very terrible story and absence of character development, which, contrary to a well-trod path of thought, is not a prerequisite for a stomach to fall and turn.  It is without consequence because it is without coherence: it is incredibly difficult to see just what is happening, which robot wrist is sawing through which.  This is the consequence of a terrible, terrible brightness and clutter, in which sheets of office paper rain down side by side with trails of smoke and glass that was never broken.  We simply shut off, the far limit case of our own visual processing power, which, it turns out, is far lower than that capable of being registered in HD.  And so it spins and hurls, spits in our faces, but our sight is a glass wall.  It is porous only to a point, until the eyes are filled with light and incapable of mustering a care in the world.  Particularly when that care is for the well-being of a robot that is also a truck, which is also a defense of American interventionism and the indissociable link between defense of the human and defense of the west, which is also none of these things whatsoever, just an algorithm, whirling in the midnight sun. 8.  Because, of course, this is a film that lays more waste to content represented on the screen, in its richly-grained detail and yet which, in the process of its production, destroyed almost nothing in reality.  Laid no waste to cities, sent rockets into no shopping malls.

Consumed nothing, that is, other than literal tons of coal required to power the CGI data processing, other than rare earths frying out from overload, other than little salmon, truffle oil, and pomegranate reduction mini-tarts for the cast, other than an extra permanently brain damaged from a rare piece of real metal, other than nerve endings and synaptic pathways burnt out, other than time itself, other than this time, writing these words, on something that is both as telling of our time as can be and as utterly indifferent to it, other than massive sums of money dematerialized and sunk into the faint shimmer of dust rising from the shuddering body of a robot rendered from scratch, other than all those hands and eyes through which these circuits pass, like that burrowing, winding worm, but without awe, without a speck of glint and worth and glimmer.

Other than all that.

Brilliant. And funny that you post this, Evan. My wife and I went and saw the other night. Because we were bored, and because it was cheap and at the local drive-in what doesn't care if patrons drink in public. But mainly because last year we moved from Chicago, where we'd lived for many years, and expected to take some schadenfreude in watching the city's downtown area take a thorough (altho' merely spectacular) bashing. I personally was hoping to see Trump Tower reduced to rubble, or Anish Kapoor's "Bean" being used as a projectile.

And I was laughing through most of the post above, because your comments matched my impression of the film perfectly.

(Except for the bit about: "This is due less to the very terrible story and absence of character development... [and] the consequence of a terrible, terrible brightness and clutter,..." I had the involuntary & tedious misfortune of having sat through the 1st in the series some years ago. I'd say that the new one actually made noticeable improvements in these respects [if you can believe it].)

I think you've hit on something: the deep marketability, far too often overlooked, of having very specific and very hated details and elements of cities reduced to rubble, or used in the reducing of everything and everyone else to that rubble. Just wait: the local customization of big budget cinema, as different versions are released in every major urban area, with landmarks and accents swapped out...

Given I'm in Paris now, I would fully support a version in which the uprooted Eiffel Tower is used to impale Optimus Prime.

Well, Americans have always had a love/hate relationship with New York...usually tilting more towards the latter. But you can show NYC being punished only so many times before it becomes redundant. So I guess the location's bound to change every now & again.

But DC did take some hits in the film, as well; which has its own set of symbolic triggers for many American viewers. (Which I think you touched on with the bit about "which is also a defense of American interventionism...and defense of the west.")

I floated down the Chicago River on an architectural tour boat while Bay destroyed downtown. It was one of my last nights living in the city, and my sister was treating me to all of the touristy spectacles I could not afford as a grad student. The tour, returning through the locks from Lake Michigan, was greeted by a vacant, burning boat bobbing in the water while a police craft steered river traffic around the stunt wreckage. Flashes of smoke and light on the ledges and rooftops of the surrounding skyline and a hovering helicopter with a rotating camera pod on the front prompted the tour guide to speculate that we might be witnessing a climactic scene in the upcoming Transformers film.

I was struck by how soundless the razing of the city seemed, at least beyond the murmurs of the horde of people gathered on a nearby bridge to watch the effects extravaganza. My sister and I grew bored and talked about grabbing dinner while the Jeweler's Building and other landmarks were either shot up, clambered upon, or thrown down depending on what was left in the effects budget. I was not amazed, then, to note that someone briefly tapping on their cellphone during the movie's battle capture my attention even as the echoing explosions so absent from my memory of the city's near annihilation filled the theater.

that reminds me of a story - probably not nearly as rare as it should be - from a friend who was caught in an unexpected and terrible traffic jam on the way to work in LA. Everyone was freaking out, as they were all going to be very late to their jobs.

It turned out that an 18 wheeler had been overturned for a stunt sequence in one of the Spiderman films.

Blockbusters interfere in the capacity of those who will see them to earn the money that they will use to see them...

"[It's rare to watch a film that produces a portrait so faithful to how it is to watch it.]"