Keeping busy after the end of the world (The Bed Sitting Room notes, part 1)

[In order to make reading this very extended take on The Bed Sitting Room a more plausible and pleasurable endeavor, I'm breaking it up into a few pieces. Here's the first.] 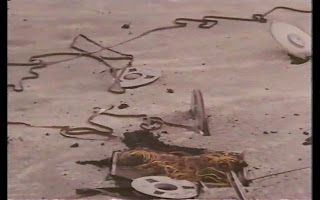 
The trajectory from relations of waste objects with their venomous use-values to radical social relations lost to our historical moment involves, in the case of our project, a particular privileging of the "cultural" object. This is not primarily an account of the real material practices of sifting through the trash of the era, nor of the people who have been forced into such labor. Our treatment of them is metaphorical, or, more precisely, refracted through the films, books, and general discourse in which those practices and peoples make their figurative appearance. On top of that, these cultural examples are overwhelmingly from the part of the world (the "developed" nations and capitalist powers) who bear far less of the burden of cleaning up their mess. These are not the ideological and political representations of material salvage-work and its consequences.

Rather, they are documents of how the dominant architecture of the late capitalist system thinks itself, however symptomatically and against its better judgment. And more, they are documents of relations: to the world at large, to the labor that produces such a world, to its discarded artifacts, and its discarded possibilities of other modes of life. Only in taking these relations as a whole, with an eye toward the last, does the work of analytical digging and searching for necessary antecedents result in a longer history of a constant apocalypse (here in its salvagepunk version) and its not very silver linings. 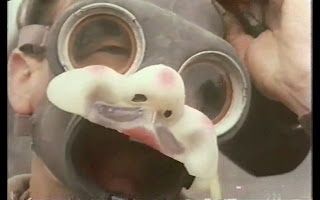 After the bomb, the gags.
If there stands, tottering and joyful, a single cultural object of salvage-thought at its best, it is Richard Lester's 1969 film The Bed Sitting Room. Not salvage as the undercurrent, and inconstant mechanism of capitalist recuperation (squeezing value out of every last scrap). And perhaps not salvagepunk per se, coming before the long downturn of overproduction and manufacturing profits, the new world anxieties of cyberpunk, and the total prolifigate waste of all that piles up and waits to be reused. Rather, some kind of obscure precursor, funnier and crueler, sloppy and razor-sharp, the underwatched and unmatched template that deserves its due forty years on. Therein lies its weird temporality: in this refuse (just another largely forgotten film), we find what will come to be but hasn't yet. Fittingly for this available but non-accessed and somewhat dusty history, it casts a different light, a different end of the 60's, a shaky birth of the long 70's, and the hastening toward the long slow fallout of late capitalist apocalypse.

And so this is both a drawing forth of some aspects of what salvagepunk might be from the film that does it best and, more simply, an appreciation for something not watched nearly enough and to which I was turned on very recently. As such, what follows is a lot of summary, and an initial gesture, one I hope to be followed by others, toward situating this amazing thing dropped from the tail of the 60's into our lap. It is very dark, it is very uncomfortable, it is very funny, and it is very, very British.

As one critic put it, it is "like Samuel Beckett, but with better jokes," which is pretty spot on. Nominally based on the Spike Milligan and John Antrobus play in 1963, Lester's cinematic version is a staggering vision of waste and remnant, of frozen, necrotic social relations, and of what we keep doing to keep ourselves busy after the end of the world. 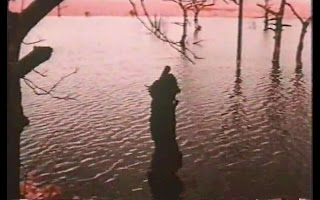 What we do, at least at first, is that very familiar (and none the less softly startling for the fact) gazing onto the stillness of a world abandoned. The film starts, backed by the soft opening horns of its score, with images of nature in fuzzy flux: staring into the sun, the movement of lava. This gentleness all adds up to the quiet of a world reclaimed by nature, a new pastoralism without shepards.

However, the reels of unspooled history (not my metaphor: a literal image recurrent throughout) start to pile up onto this unspoiled tableau of quiet real things. 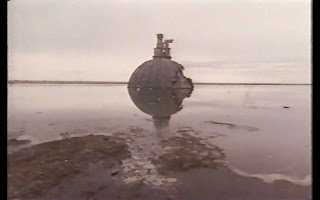 With this glimpse of the bomb-hollowed dome of a partially submerged St. Paul's Cathedral (thereby marking the wasteland as London), the sense of a nuclear fallout emerges immediately. Here, in the return to the center of the British empire, is an unavoidable echo of the Hiroshima Atom Bomb Dome.

This resonance acts as an ominous designator of how the world got to be what it is. Furthermore, it is the early sign of the tensions that produce the distinct look of the film and its spaces. For the lyrical solitude of the single stump in the rippling water and the minimalist elegance of the sunken dome meet their negation in the unfathomable amounts of crap filling this world, oceans of trash, slabs of concrete, rusting infrastructure, all the hallmarks of an apocalyptic event that left its mess to be cleaned up by the survivors. 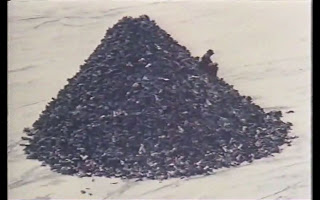 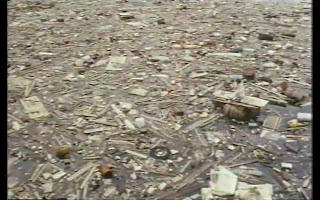 In short, the unresolved aesthetic of the film - its deep ontological messiness - is staked on the gap between the empty and the overfull, between a depopulated world that cannot be filled and a world that is hard to fathom repopulating without clearing away some of this rubble. There may be only 20 or so survivors, but the ground is never clear. Any starting over again is life in the ruins, and not just in a theoretical sense of the end of history.

Yet this is a film which does not beg such a theoretical reading, it insists on it, shoves it on the surface, transforms it into a gag, and repeats it until it passes from quite funny to quite unsettling. It is shot through, from the get-go, with a surprisingly subtle dialectic of event and process, which here takes the unsteady form of the capital-E Event (the Bomb, the catastrophic rupture that literally cannot be spoken, resulting in odd gesticulations, much hemming and hawing and making bomb sounds with your mouth) and static process (after the Bomb, the interminable durations and banal rhythms of everyday life, keeping up appearances as long as even one witness remains, going on because we cannot not go on). In other words, between what is done (and over with) and what is done (over and over again). The call of what is to be done, Leninist or otherwise, to jumpstart this halted progression is the stillborn question that hangs over the whole film. One shares the unspoken feeling, with the fumbling bravado and convention and tradition hindered agency of the characters, that the problem with the apocalypse was that it wasn't apocalyptic enough: it did not clear away the dead weight of the previous world configuration. It was nearly an anti-apocalypse, in that it seemingly did not reveal the hidden but made hidden what was already visible, what was to be done. This is, of course, the false angle, for what the film is really about isn't a mourning for the absent New but a real struggle to find the Old worth salvaging. It is a struggle to become post-apocalyptic, a task which requires both remembering the past (speaking the Bomb, preserving old forms of social relation) and forgetting the past (letting it become History, throwing away the inherited relations of domination). You aren't post-apocalyptic because the apocalypse happened, the film stresses. You become post-apocalyptic when you learn to do something better, or at least more morbidly fun, with the apocalyptic remains of the day.