Through the motions, wrongly 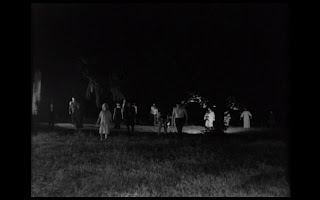 Romero's Night of the Living Dead (1968), the real launching point of zombies in mass culture, is one of those odd "foundational" films. It has its antecedents, to be sure, in three major strands. First, the voodoo inflected zombies of Victor Halperin's White Zombie (1932), Jacques Torneurs's I Walked with a Zombie (1943), and the shoddy knock-offs of both (i.e. the remarkable/awful Zombies on Broadway from 1945). Second, and more directly in terms of inspiring what Romero was "trying to do," Richard Matheson's 1954 novel I Am Legend. (This would also include Ubaldo Ragona's 1964 film adaptation, The Last Man on Earth, in which we watch a survivor defend a house against hordes of the invading undead, perhaps the most common image across zombie movies.) Third, a tangled mess of aesthetic influences that give the film its distinct look: film noir lighting, Psycho-era Hitchcock camera angles, news reel footage, art-house discontinuous cutting and spatial disorientation, and the basic fact of doing the whole thing for very, very little money, and hence having the look at times dictated by what was available. All that said, Night of the Living Dead represents a shot in the dark: excepting the third strand of all the formal and aesthetic elements cobbled together, it is a notable, singular film, in just how far it goes in leaving behind those antecedents.

But like other horror films that seemingly start a trope (Nosferatu, Frankenstein, etc), they are already weirder and more sharply knowing about their absent source material than they "should" be: they seem to play with and off of an established template that cannot be found.* In other words, they are the films that themselves establish the rules of the game, from the "look" of the film, the kinds of stock characters and settings, broad tones and set moves, and the effect they are aim to have on the audience. Yet at the same time, they are already screwing around with those very rules: they define a genre by the way that they "misread" source material that wasn't there, at least not in any immediately accessible direct lineage way.

In other words, like other films that inaugurate endless series of imitators, spin-offs, reloads, mash-ups, and sequels, the "original" is original largely because it nails something about "what we've seen before" and know very well. What is new it articulates via the inherited tropes and moves of the old: the inherited language of film conventions eases us in and makes even that which we've never seen before seem familiar, well-worn, and expected. Conversely, what seems recognizable immediately, the "ah, yes, here we go again", is precisely the point of immediate departure into the uncertain, where it turns and goes the wrong way. Fittingly for the film that starts "the zombie film" per se, the uncanny and unsettling happens because something "goes through the motions" wrongly, just like the zombie's obscene parody of the movements and habits of everyday life. What the zombie film in particular offers, both in its content and in its relation to other films, is that the minor gap between the inertia of expected behavior or patterns and the yearning pull - affective, physiological, or historical - in another direction is that very gap, that crack in the totality of a system, through which the unwanted pour in.

Outside, looking in
Think here of the beginning of Night of the Living Dead, where the first zombie we see - the first recognizable zombie of late capitalism - looks like nothing so much as a homeless drifter of sorts, a gaunt raggedy man. Tellingly, Barbara and Johnny, her soon-to-be-killed-and-zombified brother, hardly pay him a second glance: at worst, he'll ask them to spare some change. He is not marked as undead, at least not in the technical sense. Just as unwanted. Therein lies the explosion out of and against the accepted codes of who we recognize and who we don't: the zombie's furious attack, which here has nothing to do with trying to eat them, is the feral assertion of the right to be noticed. Even to the end of the encounter, we can practically read on Johnny's face the bourgeois frustration: funny, it's not usually this hard to kill the poor...

* This approach to genre-defining horror films is entirely indebted to Marsh Leicester, whose way of thinking about these odd lineages inflects my thinking throughout this project.

I went to Los Angeles for a week in 2006 and made the mistake of checking out online reviews of prospective places to stay. It was my first time in the US, not to mention in a city that size and with that hypermediated reputation, so I'll admit that I was a bit trepidant too about the relative safety of each of the neighborhoods - I won't claim to have been immune to any of that. But the manner in which those reviews articulated it really struck me: it was a litany of "downtown is great, but at night the homeless come out" followed by descriptions of the poor tourist swamped by beggars and swearing never to go past the concierge after dark again. You could have substituted "zombie" for "homeless" and auctioned the film rights of most of those accounts on the spot.