not just the formless spider gob itself, but the production of it, the metamorphosis when it goes from being saliva to being spittle, like magma to lava, the "expectoration" (that word flawless, as it includes flinging expectations themselves to the ground to be trodden on) -

is the crucial substance of pessimism.  More than the melancholic's bile, which is petulantly hoarded, except in moments of sickness, and only then, it only comes out as a last resort and against one's wishes. No, spittle is pessimism's moronic Promethean labor, transformative and active, the tossing forth of what should lubricate good speech, the consumption of food, kisses.

Instead, kicked out to spite a word (that which has not been fully spoken but which has wound itself through all the liquid of the mouth), a rich man ("someone took him into a magnificent house and warned him not to spit, whereupon having cleared his throat he spat into the man's face, being unable, he said, to find a baser place", of which Cioran write, "Who, after being received by a rich man, has not longed oceans of saliva to expectorate on all the owners of the earth? And who has not swallowed his own spittle for fear of casting it in the face of some stout and respected thief?", such that one swallows one's hostile.  How can an ulcer be a surprise?), a civilization (“Whenever I pronounce the word civilization,” Gaugin cried, “I spit.”). 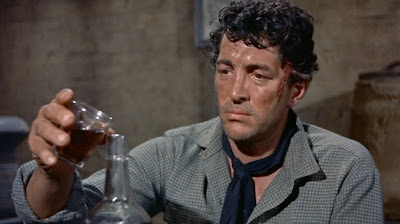 I think, though, of what it means to spit during a rainstorm.
I think of the dollar thrown into the spittoon and why, before whiskey-desperate Dude can fish it out of the slime, Chance kicks the spittoon away.  How Dude knocks Chance out cold.