"And the tiniest spray, starlike scatters, hitting the bottom of the empty pail" (Notes on reading Eisenstein, 1) 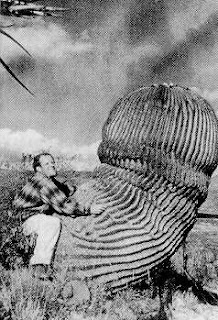 Beginning my project of reading, watching, consuming everything Eisenstein I can get my hands on. And I'll share thoughts as I go, moving toward my larger project on the primacy of dialectical expression (and the impossibility of dialectics in thought). Reading now Nonindifferent Nature.

In "Poor Salieri (instead of a dedication)," Eisenstein writes:

Pushkin's poor Salieri.
He dissected music like a corpse...
And in this lay something really terrible.
Like a corpse.

To be sure, the reiteration of "like a corpse" is the sort of back-stressing, the pathos of what it means to approach music as such. But we might read it otherwise, and in doing so, get a sense of the particularity of Eisenstein's dialectics. For it is not just that he dissected music like a corpse, but in this corpse, in this making as-if-of-corpse, he finds that what lies inside is something really terrible: something like a corpse.

What is at stake here is a conception of how the act of unmaking, of morcellating objects of study, is the very production itself of that act. To dissect music like a corpse is not to mistreat music but to give birth, through your dissection, to the corpse that was always there but never detected, the something terrible that is not a corpse, but rather, like a corpse, an approximation of how we look taking non-form in front of us.