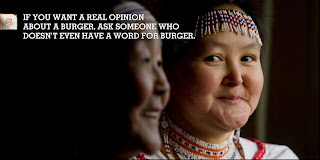 This is, insofar as I can tell, not a joke. The new advertising campaign for Burger King: "Whopper Virgins." Combining a stunningly fucked conception of cultural inheritance and "native dress" (see above for the union of the two) with a deeply sinister yet baldfaced presentation of globalization/creeping tendrils of global capital. The rough idea would be that in order to decide which round-shaped-travesty-called-a-burger (Whopper, Big Mac, everything else) is objectively better, one must find proper subjects who... don't have a word for burger? Don't consume primarily the products of monocultural farming and excessive processing of simple carbohydrates?

The core of it seems rather to be: these are ads that hinge on the support structure of those subjects who do not grasp advertising, who are "pure." Encoded in this, then, is the oddly self-aware stance of the corporation: look, we know that your consumption habits are so mediated by advertising - as we want them to be, we're not suggesting that you change that, good God no - that you no longer can even taste things correctly. So we're bringing in a pinch hitter, the global dispossessed, to function as the externalization of the sensual apparatus you all used to have.

But in the ads below? The promise of "Real Whopper Virgins." And that promise is... Indigenous peasant women gone wild! For processed meat and fluffy white buns! 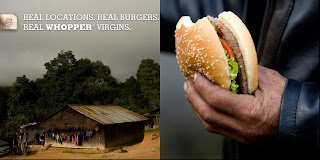 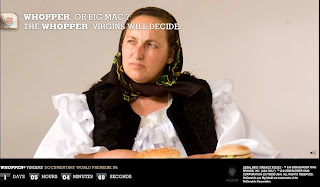 I don't know if this is more depressing because of what it says about our food industry or because we may be staring here at the sublimated future of pornography. The Whopper Virgins will decide...

I'm curious to see if there is the analogous stretching of the viewer's complicity. (As in, "sure, she's got C-section scars, but she could be barely 18.")