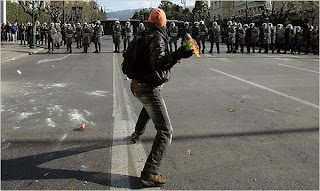 "after dark hundreds of professed anarchists broke the windows of upscale shops, banks and hotels in central Athens and burned a large Christmas tree in the plaza in front of Parliament."
(from the NY Times descrition)

More importantly, this text from those occupying the School of Theater in Thessaloniki:

EITHER WITH THE GUNS OF THE POLICE - OR WITH THE STRUGGLES OF SOCIETY
No insurrection in history could ever be controlled, manipulated, or submitted to ideologies or political parties and mechanisms, it could never be merely political in content. Every riot, every insurrection has always been a social affair and has thus been deeply political in the broadest sense. After the murder in cold blood of 15-year-old Alexandros, a tumult of rage and discontent has come to the surface. A wave of excluded, disappointed, repressed, desperate people flooded the streets, of diverse cultural background, education, experience and class and were united in a spontaneous cry of a society that is being suppressed, deprived of its future, that is watching its dreams being crushed. This is a generation that has been systematically excluded from any means of expression, deprived of any possibility to decide for itself at school, at university or at work, through its growing alienation. This generation is choosing destruction as its own expression of rage and creativity. Rage is not just a feeling. It is a struggle for social justice. As long as there is no justice, there will be no social peace.

We are out on the streets as part of this society but also as part of this social rage. We do not seek to be the leaders of this discontent, we are not experts in violence. We are out on the streets because we are on Alexandros' side. Any one of us could have been in his position. We know well, from our everyday experience in social and labour struggles, in the struggles of immigrants for dignity, in the struggles of the marginalized and the prisoners for a glimpse of freedom, that the State and the institutions of power have always confronted us with the finger on the trigger.

We do not just feel hurt, outraged and revolted by the unjust death of a young person. We are also fully aware that, whether we are friends, parents or relatives, for each one of us and each of our beloved ones, there is a police bullet waiting for its fatal call. Guilty are the State and its uniformed murderers. It is they who are the true specialists and actual managers of violence.

They started it. They are the ones who are responsible for this wave of violence and insurrection that broke out with the murder of Alexandros. There was never justice for the murders of Koumis, Kanellopoulou, Kaltezas, Temboneras, Boulatovic, and of so many more immigrants...Social rage grows with State violence, chemical warfare on the streets (teargas cartridges shot directly at demonstrators), rubber bullets, beatings and hooded plainclothes policemen arresting demonstrators.

However hidden from the majority, all the above-mentioned incidents are true.

NO MORE HYPOCRICY. THESE ARE NO "ISOLATED INCIDENTS" - THIS IS THE REALITY OF STATE VIOLENCE.
COPS SHOOT TO KILL - WE ARE AT WAR

Whoever pretends nothing is happening has already chosen which side they are on.