These are dark days. A Wal-Mart worker killed in a stampede of frenzied shoppers.

Throngs of Black Friday shoppers stampeded the man as they rushed into the Green Acres mall in Valley Stream minutes before it opened.

"When the doors opened, all hell broke loose," a law enforcement source told The Post.

Full article from the Times here.


And...
In California, two people were killed in a shooting at a Toys 'R' Us in Palm Desert, according to the Riverside County Fire Department. The shooting occurred about 11:36 a.m. (2:36 p.m. ET), authorities said. 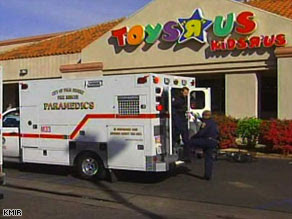 Look, even if Soviet grocery stores had endless lines and fights to get staples such as salt, flour, etc, they weren't fighting over getting the best deal on a Clay Aiken box set, George Forman grills, or some configuration of articulated plastic intended to be more fun for a kid than a basketball and a jar of glue.

Yes, when we hang the capitalists, they will sell us the rope we will use. But they'll probably convince us that the new model of synthetic fiber Hangman 9 model rope is more effective and really gives the execution that special something. And we, we will probably pay out the nose for it.