Scattered thoughts on, and images from, the Cold War Modern show I went to in London. 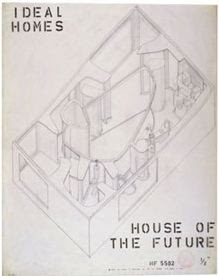 The Smithsons' design for the house of the future
A far, far cry, it seems, from Robin Hood Gardens. Are arcs and curves and ergonomic shapes only allowable in the future? Why then, do the 60's require the monolith and gridded hulks of Brutalism? What changes in the future will mean that we will have outmoded those shapes? What is the assumed gap in history that will undo the Brutalist project, with the consequence of making these self-designated "futurish-seeming-shapes-and-lives" needed? 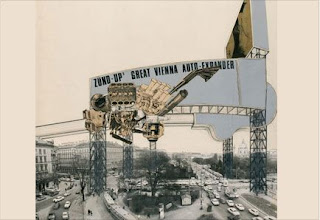 This is basically a pinball machine design for routing traffic around before finally compacting them into what I can only imagine as bleeding, burning of metal and passengers. I think I shall propose a similar solution to traffic here in Santa Cruz. That and random mines planted everywhere except for bike lanes. Rather subtle encourgagement to give up the automotive ghost. 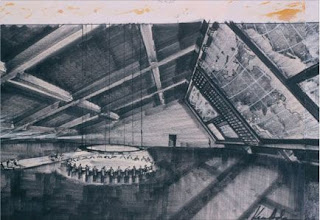 Sketch for the set of Doctor Strangelove. 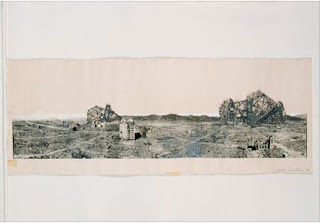 Design for the non-reconstruction of Hiroshima.
I sadly can't recall the name of the artist who did this (anyone know, let me know), but it's remarkable. It reminds me of how I want post-industrial landscapes to be treated and reinhabited: preserve the skeletal wastes of the processes brought about by capital, yet recolonize precisely from that position, not as some new gentrifying, revitalizing force, but as survivors, colonizers who set up outposts of new life in the wastescape. What happened in the rebuilding of Hiroshima was nearly precisely the opposite: one outpost of the past was preserved (the bombed-out shell of the Atomic Bomb Domb), a tiny kernel of necropolitics, and it was then surrounded by the incursions of economic boom and reconstruction. This is not to wish upon a post-nuclear city a continued unliveabilty but for it to insist upon the presentness of its exploded past. The solution of this photo montage is something like that: new modes of collective life that stares out and through the lens of a world gone very wrong. 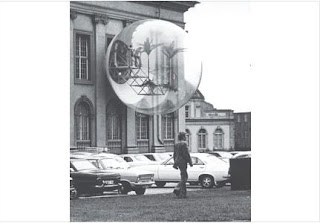 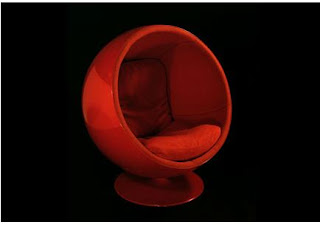 Aarnio's Globe Chair. (i.e. even atomized subjects need a womb somtimes.)
This globe chair (and the other red chair below), along with many of the other objects and designs, such as the Smithson's future house, got me thinking about the atavistic impulse in modernist design, particularly when such design finds itself on new technological territory of plastics, compounds, any-shape-possible materials.

In particular, about the question of what it means for something to self-designate as "futuristic," and the accompanying tendency of new materials to mimic - and overleap - the look and capacity of older materials. Thinking here of something like Benjamin's comments on the use of glass and iron in the construction of the Paris arcades. For, on the one hand, they represented the high point of technological innovation used to create previously unprecendented spaces: borrowing the developments from the industrialization of Europe (and particularly forms that came from railroad construction, such as long girders, and slowly curving metal lines), it allowed for those wide expanses of glass stretching over the contained markets. On the other hand, though, Benjamin notes that these new forms often took the ornamental form of previous styles and technologies, veiling their newness in a sort of nostalgia. In addition, if we think about the arcades, they are essentially old-fashioned European street markets, the tight cluster of vendors, altered only by their rainproofing (and the depth of shops, those narrow but long magasins).

In any case, with these egg-womb-kidney-intestine-bone chairs and planned biomorphic architecture, you get the further - and maybe ultimate - extension of that logic, hearkening back not to previous architectural styles but to "organic" shapes: new technologies and materials allow one to live with a vision of the very old. Though this vision of the old remains, as in the iron girder citation of earlier styles, only a referent, a hollowed out allegory of the distance from that. Making a chair like an egg implies that one has rather forgotten what eggs are like, and hence we get their form only in this plasticine, shiny, blinding bright yellows and reds. 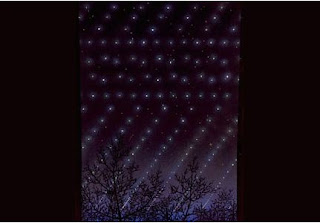 Project of the Reconstruction of the Firmament. Francisco Infante-Arana.
One can see here something like the aestheticized fantasy version of the space race. Forget getting to the stars: can we rearrange them into constellations adequate to our new modernist sensibilities? 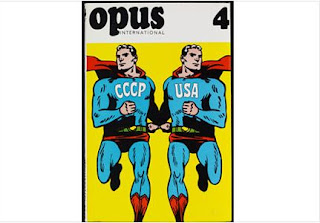 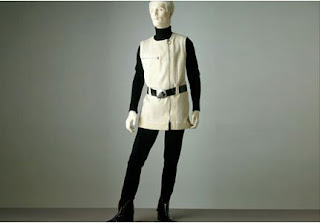 Perhaps most importantly:
why do all visions of the future involve terrifying sleeveless tunics and turtlenecks? Do we face a world with such dramatic climate shifts that we need to be able to quickly transition our look from aging bohemian with cold neck to a 60's mod girl minus her boots and plus some sensible leggings?