A symptom does not exist prior to the denial of its existence. (On syndromes and causation)

First, three syndromes worth knowing of.

The lack of filtering out appropriate responses to sudden stimuli, so named because it was discovered in French-Canadian lumberjacks working in my homeland, lumberjacks who responded to a sudden noise not by a normal degree of surprise or jump but with full leaping, wild flailing. In addition, this disorder also consists of the sudden and unthinking following of orders given by anyone as long as they are given in a loud, authoritative voice. What's quite disturbing about the testing of this disorder is the claim that, "For example, if one of them was abruptly asked to strike another, he would do so without hesitation, even if it was his mother and he had an ax in his hand". I'm not sure I want to know G.M. Beard became sure of this fact without some nasty bloody testing.

Cotard Delusion:
or le délire de négation. The belief that one is dead or that one's body (and/or parts of it) are dead and rotting, incomplete and putrefying. Of course my undead obsession cannot leave this one alone. In is, in a sense, the self-knowing of the zombie. How does one traverse the Cotard Delusion? By negating one's self-negation? Symbolically killing your already-dead self?

A penis panic (the mass form of genital retraction syndrome)
A "culture bound syndrome", this is the widespread fear among a male population that their penises are shrinking, melting, being reabsorbed back into the body, being stolen, etc.

These don't relate directly to my thoughts below on syndromes vs. symptoms, though I have began tracking out, rather morbidly, particular forms of "mass syndromes" or (in the case of the Cotard Delusion) syndromes that seem to me capable of becoming widespread conditions, not diagnostics of individual pathologies but rather as the analysis of coming times.

The question I ask here is: where does the idea of the syndrome stand in relation to a Lacanian notion of symptom and subject? What might be lost by refusing the language and structure of syndromes?

Syndrome, here, might be taken first in its clinical sense: a collection of symptoms (what the patient reports) and signs (what the doctor detects) that, taken together as an aggregate, are indicative of an underlying disease or abnormality.

Two aspects to draw out from this. First, what the idea of the syndrome entails is not only that the presence of a certain symptom or sign indicates the broader morbid condition (the supposed cause) but also that this presence of one effect encourages us to look for certain other effects that otherwise might escape our glance.

The second point concerns the underlying cause. In one register, the designation of "syndrome" is particular to when we begin to recognize a set of associated effects with no sense of the underlying, structural cause. The commonality of these aggregates, across a number of subjects, indicates - sometimes falsely - that there must a shared cause. Yet in the type of syndromes that interest me most ("culture-bound" syndromes) there is no discernible cause to be located, only a set of associations and - most crucially - the contagion of the syndrome itself, the hysteria, panic, and transferability of a set of determined symptoms to other subjects who themselves lack the underlying cause that never was.

From this, we detect both the analytic power and the ultimate failure of thinking syndrome outside of a clinical situation. What is gained, and what we should remain attentive to, is how the syndrome itself functions as a veil to cover the true cause: a constellation of effects whose interrelation proposes a common "horizontal" logic but which misses the "vertical" causation of the disease that produces these effects. In addition, it lets us begin to think about how entire sets of symptoms can be assumed on mass, beginning not from any shared causation (i.e. some set of conditions that produce the same singular effect in many subjects) but from the whole mess of the syndrome, the entire arrangement of signs and symptoms that itself produces those symptoms after the assumption of their relational logic.

While we might guard these observations, particularly the later, as a way of thinking how ideological forms self-replicate, stressing syndromes over symptoms leads to a certain type of reactionary political logic and bad humanist notion of the subject of economic processes. We can put these objections quite directly.

The syndrome seems to become a veil for the true cause of its associated effects, but the true cause is itself that veil, that attempt itself to find a "true cause".
In other words, the cause of the symptom is always the attempt to repress the symptom, in the retroactive circuit through which the symptom comes to be via the imposition of a system of reading that is threatened by its symptoms. (A symptom does not exist prior to the denial of its existence.)

The rational organization of symptoms into a syndrome - an organization that is precisely fantasmatic in its character - misses the fact that all symptoms are singular and incommensurable, even while they function as the knots that make meaning-making possible.
If fantasies are the attempt to provide narratives and structures for desire, then this syndromatic structure is itself the naturalization of singular symptoms into a sort of cover story about "just the kind of subject I am" or "just the way the world is." Thinking our world of blind, contingent, historical effects this way flattens both their specificity (not the way the world is, but the way this world has become) and the difficult work of reading them.

The syndrome assumes that there is a constant subject beyond this constellation of symptoms, that we are something more than the organization and articulation of our constitutive misfirings.
This is the crucial failure, and one we might see deeply imbedded in a liberal notion of the subject: the idea that the subject is a plane of consistency on top of which are erected certain unnecessary structures of thought that obscure our "good human nature," the idea that modern forms of reification and alienation pervert the transhistorical self that waits in the wings to be rediscovered and shared through representational politics (if our symptoms are accidents and/or conspiracies that can be undone, there lies commensurable subjects that can be exchanged and represented).

Against this, we want to say that alienation and reification, perversions and fuck-ups, deviations and interruptions are all we ever have had or have been. To borrow a title from a Third Eye Foundation song, we are a "galaxy of scars." 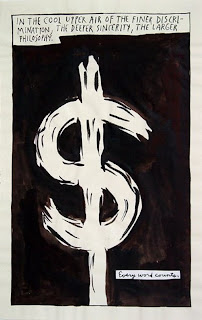 As Pettibon writes it here, every word counts, even those words, those instances and utterances, that shouldn't count or that seem to distance us from something we never could have gotten back to. Capitalism itself is a syndrome, in that it is the very lie of the natural order: one can see this in the calls for a greener, more ethical capitalism. As if it has a stable heart beneath its loops and circuits, as if it were more than the organization of our bodies like symptoms. As if it could excise and cure itself of those of us who cannot or will not be recognized in our relational logic, not just vertically bound to capital but horizontally to something like a form of being-together that starts to take morbid shape, eating away slowly at capital, from its smooth total surface to its obscene absent center.