In Romero's Night of the Living Dead, we have three regimes of vision, three structures of what to look at and how to orient oneself in regard to that looking. We have zombie sight: 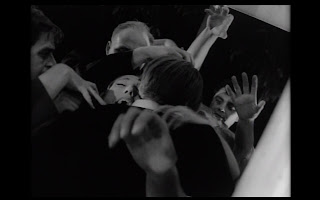 Always a tangled mess of partial objects, bits and pieces of bodies, jumbled, disjointed, already ripped apart before the literal act. The swallowing of Barbara by the horde (in the image above) is the absorption of her into that kind of optic: the pathos and jouissance of her face, a little kernel in the swarm of which she then becomes just one more bit of dissembled flesh.

Then you have Ben's mode of vision, which isn't really representable in a still: it hinges on the duration of focus, and particularly on the practical banality of his way of seeing. The visual world is constituted of a set of indexes to be correctly read so as to formulate the correct path of action. As a result, we get large portions of a horror film simply watching a man hammer boards, move furniture, and talk about gathering food and gasoline.

Third, and the point of all this, is the properly obsessive seeing of Barbara. 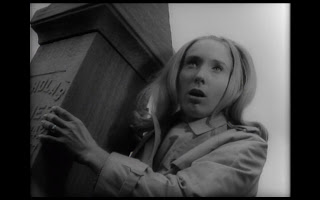 The death of her brother Johnny inaugurates this structure of sight, both for her (in the POV shots we are given) and for the audience (the breakdown of diagetic/non-diagetic commensurability, the non-linearity of spaces, the breaking of classical Hollywood cinema rules, and so on). She becomes a traumatized subject, bound to an obsessive mode of organizing the world. (Obsessive here should be read in the Lacanian sense, as that particular form of neurotic subject for whom the central question is not the hysteric's am I man or woman but rather am I alive or dead. The obsessive is s/he who is shattered by the contingency of existence and bears an unsupportable, unsurpassable guilt about the fact that "I live while others do not.") This is precisely the neurotic order that Barbara imposes on herself at the very moment seen in the image above, her inability to intervene in the death of her brother (who is coded as both taunting Big Other and as lover, as held-in-abeyance site of pleasure, as becomes evident in her long speech to Ben about Johnny).

What, then, is the consequence of this obsessive operative mode for the structure of seeing? In short, what is "Barbara-vision"?

It is a visual field equally racked by contingency, a way of seeing that remains incapable of connecting causes and effects. It is seeing the world as composed solely of untraceable symptoms, of stains upon the order that once was. This is literalized in the obsessive practice of her gaze, unable to stop herself from staring at not the rotting corpse on the stairs, but on the visual stains it leaves behind, a pure aesthetic phenomenon, until it really stains her, black blood hitting her hand and undoing, for a moment, the new obsessive fantasy that demands she take no pleasure in this radically contingent new world. For a moment, she - and we with her - get a pure pleasure of looking, decoupled from the violence that produced these effects.

And if Barbara's vision is a vision of stains, there is equally a stain of vision that persists beyond her death in the zombie swarm, a sudden reemergence in the midst of the sequence where zombie Karen kills her mother with a trowel. 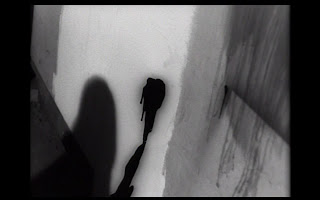 The dramatic contrast of the blood on the white wall appears not just as a stain in the world of the film but a stain on the film itself, a pulp horror version of Brakhage's handpainted 8 millimeter work. Something splattered not from within. Something from our side, our being hailed into and hurling onto this undead, obsessive space.