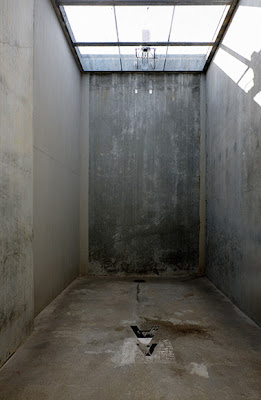 Something that is guaranteed to receive far less media attention than those Occupy Wall Street Brooklyn Bridge arrests, yet which is arguably far more important, desperate, and powerful: the 12,000 prisoners now on hunger strike in California.  This concerns the organization it takes to try and concretely modify the hell in which you live, however you can do so, and with whatever tools you have.  In this case, the only tool at hand is your continued existence as such and the prospect that your death, when combined with others, would cause some problems for the institution that tries its damnedest to reduce you to a technically continuing existence, and nothing more.

The demands are simple: to have the chance to be more than just technically existing, breathing, consuming, aging  It is a threat of sabotage - the problem (mere existence) becomes the very thing turned back upon itself - at the most fundamental of levels, being fought out in the worst place possible in this country.


Numbers released by the federal receiver’s office show that on September 28th, nearly 12,000 prisoners were on hunger strike, including California prisoners who are housed in out of state prisons in Arizona, Mississippi and Oklahoma. This historic and unprecedented number shows the strength and resolve of the prisoners to win their 5 core demands and is a serious challenge to the power of the California prison system and to the Prison Industrial Complex in general.

The receiver’s office and the CDCR begin monitoring prisoners who have refused food for 72 hours or for 9 consecutive meals. Representatives of the hunger strikers have previously stated that this will be a rolling strike, allowing prisoners to come off strike to regain strength. Because of this, numbers will likely fluctuate throughout the duration of the strike.

Ten faculty members of the Cheltenham High School participating in a hunger strike in support of moving Josh Fattal, graduated from Cheltenham.