... but the shitty flashlight we carry through those woods, the kicking-back chainsaws we wield to take them down first, my piece on said topic for Mute is up.  Given space limitations, it's halfway between a skeleton and a sprint.  Hence consider it a gesture to be followed out from there (perhaps into a book-shaped thing), in part by me, especially on a few fronts: in the elaboration of the theory of alienated labor and commodification underpinning this, on the "sabotage relation" as double/inverse of the exchange relation, on how I am not kidding whatsoever when I write that claim that we literally live surrounded by the crystallized hostility of dead labor and time wasted, and on the way in which a perhaps not small part of 20th century cultural production has been marked by these questions). And, I hope, in part by others who pick it up from there. 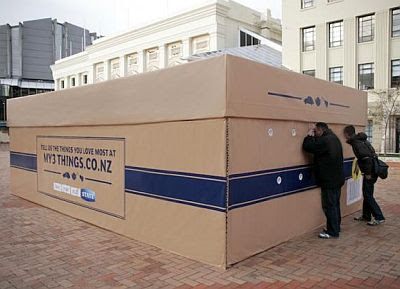 second, and on that note, Giovanni - who was a significant help and influence on this work -  has already done so, preemptively, taking on a deeply strange insurance commercial, the injunction Love your stuff, and, more broadly, on the hostile edges of "mediated memory", where "subjectivity doesn’t coalesce according to orderly and normative patterns of behaviour but rather explodes into a fitful incoherence."

The Mute piece is absolutely incredible. The thinking that you, and Giovanni, are doing is really exciting.

Your point about the horror genre's impasse in thinking of this hostility sans antagonist is something that I think I tried to write about (following Giovanni's post on "Up," I posted it here http://uninterpretative.blogspot.com/2010/11/balloons-bubbles-diamonds.html ) when I was trying to argue for Craven as an interesting counterexample to the "Thir13en Ghosts" style haunted house movie. Although your point about comedy makes me think that maybe the impulse we have to laugh at Craven's movies stems not so much from that stupid "it's so bad it's good" pseudo-explanation as a sense that what he's doing with houses actually falls much closer to the spectrum of comedy than to horror proper.

Also, I registered this blog on a whim http://postooo.wordpress.com/ because I thought that the idea of a "Post-Object Oriented Ontology" would piss off the OOO guys to no end (for the record I think that Harman and Levi Bryant are both really interesting thinkers, but also big fucking babies). A couple people have expressed interest in posting to it, though, and all of us are influenced by the Hostile Object Theory stuff, so hopefully something good will come of it

The Mute piece is awesome and I was pleasantly surprised to find it end with the phrase "straight to hell" because I've been meaning to share this excellent dissertation by a former prof of mine with my favorite communist blogger. Its Big Idea is that the first volume of Capital is deliberately structured after Dante's Inferno, and that Capital has an analogous rhetorical goal, i.e. emboldening its audience to pass through Hell (Capitalism) to the other side. The first hundred pages are basically setup, clarifying and useful but kind of dry. The fun starts around page 103.

you realize, I'm sure, that the full acronym would be POOO. How fitting... (My thoughts on things that start with O-O are a longer issue, but I think that my comments in the piece (besides, with a better acronym: HOT) give a sense of my disagreement. Namely, that much of that bent is, at best, apolitical (which is fine when one is talking ontology as such, if such a thing interests you), and at worst, incapable of/idiotic at grasping the historical specificity of capital as both material and conceptual order (which is never fine under any case, particularly when one wants to try and claim a "politics" for an ontology).

More on the terrain that interests me: although too much on the plate these couple months, but after that, I'd like to turn this work into an extended project (perhaps book-like) with contributions from far and wide. When said time comes, count yourself on board.

Anon: (would this be Marina, by chance?) If so, looking forward to seeing your piece for Ben's and sounds like a discussion of things like aura (and, god forbid, art) will be a needed counterweight to the other hundreds of pages on l'écart, secession, et cetera... (I count myself within those pages, as mine is on the "without reserves", inhuman nature, banality, Camatte, barbarism, and so forth.)

Gabriel: many, many thanks for this ocean of madness. When time opens, I will go down into it.