[a conveniently cross-ocean echo of a screening of this in London.  If you've never seen this and are in our area, it really is not to be missed - Erik's description below ain't kidding.] 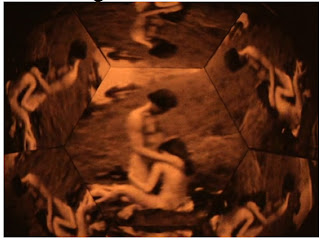 I’m a romantic. I claim there’s no real revolution without free love.
A supremely bizarre movie that intercuts experimental documentary footage shot in the U.S. with a fictional narrative (filmed in Belgrade) and archival recordings (of, among other things, a Stalinist propaganda film and Nazi electroshock treatments), W.R.: Mysteries of the Organism is a free-for-all pick-and-mix collage work that seeks to fragmentarily embody the beliefs, concerns, and methods of Wilhelm Reich, a rogue Austrian psychoanalyst, former Communist Party member, inventor of the orgone accumulator, and author of (among many, many other things) The Function of the Orgasm, The Mass Psychology of Fascism, and Sexpol.  In a nutshell, Dušan Makavejev’s film is an invaluable document of and from the free love era.  Come for the fucking, but stay for the decapitated head that won’t stop proselytizing about the revolutionary potentials of fucking.  Not to be missed in any case.
Tuesday, February 8th
Stevenson 150, 8 PM
For the remainder of the quarter, we will be showing 1970s films from different countries each week.  Same time, same place.  All are welcome.  Tell your family, tell your friends.