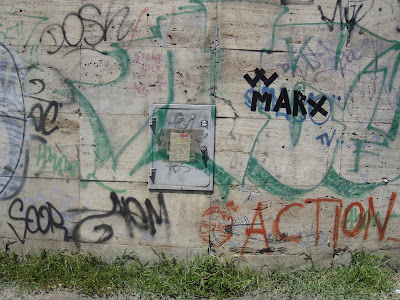 In news that makes me happy, the Roman Letters are becoming a book this year, from Oslo Editions, with whom I worked on the Contra Mundum volume.  They are terrific designers, and the book will itself take an uncommon shape appropriate to the epistolary mode and the kind of project the writing became.  In short, now you will be able to read about partisanship, Michael Jackson impersonators, swagger, the clavicles of dead Christians, duration, and street dogs in paper form. Also, there will be the final four letters which, for a few reasons, were neither posted here nor sent to their destinations, on the topics of:

- Burri's burned canvases and Argento's puddles of red, or rather, violent represented by or done to materials, some of which may be human

- wolves, Italian fumetti, gang/racket/group formation, and how not to turn from our enemies onto each other

- The New Pessimism, i.e. the only stance possible when watching Italian 14 year old young "men" interact with the public sphere

- property, space, and leaving (on going from not belonging to against belongings as such)